Part one of my data analysis for Democratic Audit (16 July 2013) on MPs’ geographical roots, considering birthplaces and secondary schools. I found only around half of MPs were born in the region they represent, let alone their constituency, despite many stressing their local origins to voters.

Playing the ‘born and bred’ card is a popular move for MPs of all parties looking to persuade voters of their suitability for elected office.  A glance at the biographies MPs publish on their own websites establishes as much.  For instance Gordon Birtwistle, Liberal Democrat for MP for Burnley, trumpets that he has lived in the town for 33 years.  Lyn Brown, Labour MP for West Ham, lists the primary school she attended as proof of her local credentials.  Conservative Michael Ellis, MP for Northampton North, goes one step further and names the local hospital he was born in.  These sorts of claim run counter to a popular perception that would-be MPs spend years before their election skipping across the country looking for any available safe seat they can stand in.

There is no doubt that the House of Commons contains a mix of MPs representing areas where they have strong local roots, and those that have wandered further from their origins.  This may be seen as a strength, because an effective legislature surely needs to include members with a variety of past experiences.  Problems may arise, however, if particular regions are under- or over-represented.  This analysis aims to shed more light on whether this is the case.  In this first part, the birthplace and school location for MPs is examined.  In a further post, part two will focus on where MPs went to university and where they worked before being elected. 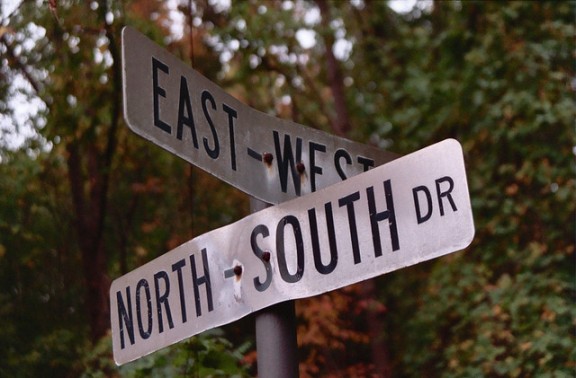 How many MPs grew up within the region they represent?

We can see how many of its MPs were born or finished secondary school within the region their constituency is located in.  The figures show a just under half of all MPs were born within the region they represent (49%), with only slightly more having finished secondary schooled there (51%).  The devolved nations outperformed England on this measure.  While 43% of English MPs were born within the region they represent, the average across Scotland, Wales and Northern Ireland is 76%.  The North East has the most local MPs in England: 67% of its representatives were born in the region.  The maps below illustrate the findings for each region.  It is important to note here that the school data provides a snapshot of where MPs were living at age 16; it is likely that a number of MPs will have lived in other parts of country in the period between birth and 16.

Chart One: Proportion of MPs born within the region they represent 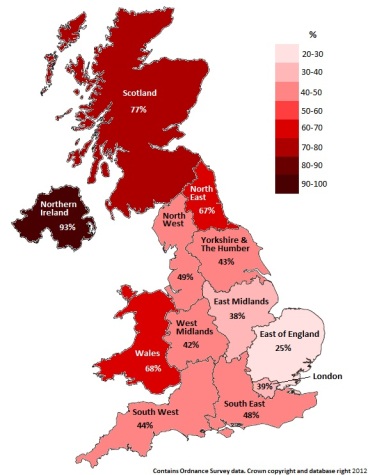 Chart Two: Proportion of MPs finishing secondary school within the region they represent

Over- and under-represented regions

The total number of MPs born in each of region of the UK is broadly in line with the number of seats in each region, with some exceptions.  Chart Three below shows for each region: the number of seats for which birthplace data for the sitting MP was available, and the number of MPs born in that region.  Scotland and London are the most over-represented regions, in that significantly more MPs were born there than there are seats in the region.  Yorkshire & Humber, the South West, West and East Midlands and the East of England are under-represented.  Chart Four illustrates the data on where MPs finished secondary school; this displays a similar pattern to the birthplace data, although the discrepancies tend to be less pronounced and the South East emerges as an over-represented region.

Chart Three: Number of MPs born in each region 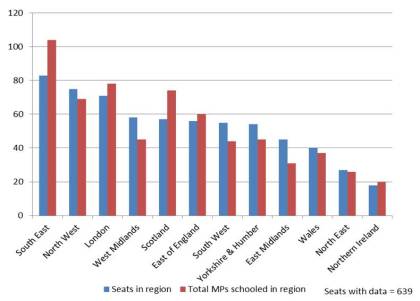 When the data is broken down by party, it reveals a trend in which MPs appear to migrate from peripheral regions into their parties’ stronghold region.  The data for the Labour and Conservative parties is shown in Table One below, with other parties not having enough MPs to allow a meaningful breakdown (the table combines individual English regions into the North, South and Midlands).

Table One: Proportion of Labour and Conservative MPs born in each region

Labour has significantly more MPs representing seats in the North than it has MPs born in the North, suggesting a migration from other regions – the South in particular.  The reverse is true for the Conservatives.  For both parties, more MPs represent Midlands seats than were born in the Midlands.  This pattern is repeated in the data on where MPs finished secondary school although the effect is less pronounced for the Conservatives in particular.

Scotland appears to the most ‘successful’ region of the UK in this data, with a disproportionately large number of MPs raised north of the border.  Both Labour and Conservatives have more Scottish MPs than they have seats in Scotland.  There are 85 MPs who we can plausibly consider Scottish: this includes 64 who were born in Scotland, a further seven who finished secondary school in Scotland but were born elsewhere, and a further 14 who finished secondary school in Scotland but for whom birthplace data is not available.

Of these 85 Scottish MPs, 52 represent parliamentary constituencies in Scotland.  This leaves a group of 33 ‘migrant Scots’ who represent seats elsewhere in the UK.  There does not appear to be any bias towards particular parties among these MPs, as shown in Table Three below.  Although the majority of migrant Scots are Conservatives the proportion is in line with the Conservatives’ strength in Parliament.

The geographical distribution of the migrant Scots shows more variation from expected patterns.  In particular, a disproportionate number represents seats in the north of England: while 27% of parliamentary seats are in the north (excluding Scotland), 39% of migrant Scots represent northern seats.  We might assume this is based on pure proximity, but this is undermined when looking at regions within the North: there are no Scottish MPs in the North East of England, and seven further south in Yorkshire & Humber.

Note: The data includes all MPs in Parliament on 14 October 2012, where biographical information was available. Birthplace data was found for 473 MPs and school data for 639 MPs.  The full, anonymised dataset is available to download here (ods format).