My article, co-written with Sean Kippin, for Democratic Audit (27 August 2013) on the way Speakers of the House of Commons are elected. We argued that Speakers’ constituents are disenfranchised by the process, and consider what the UK can learn from other countries.

The Speaker of the House of Commons takes no party whip, answers to no party leader, and displays an almost judicial neutrality in the big policy issues of the day. While most keen followers of British politics are aware of this, what is slightly less well known is that by convention the ‘main’ political parties (Labour, Conservative and Liberal Democrat) do not stand against a Speaker seeking re-election to Parliament at a general election. Effectively, this means that voters in the Speaker’s constituency are prevented from participating fully. 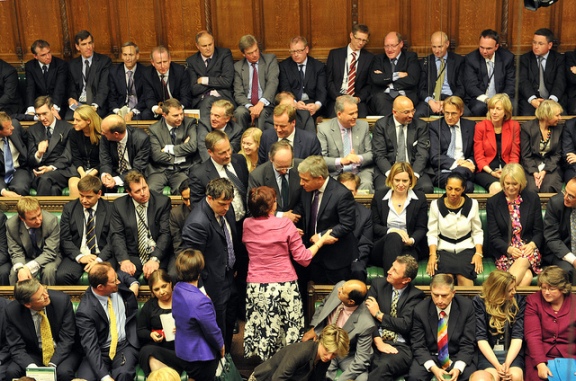 Though often presented as a long-standing component of our constitutional settlement, absolute compliance with this convention is a relatively new development. For example, Labour stood candidates against ‘Conservative’ Speakers at three relatively recent general elections (both of 1974’s elections, and again in1987). The last two General Elections have seen Speakers face genuine political opponents in the form of the Scottish Nationalists (in former Speaker Michael Martin’s Glasgow North East constituency), and UKIP (in the case of John Bercow’s challenge by Nigel Farage in Buckingham). In both cases, there was no Conservative, Labour or Liberal Democrat candidate when they each sought re-election as Speaker.

So while voters in the Speaker’s seat do usually have the opportunity to opt for an alternative candidate, this opportunity is curtailed by the lack of choice on offer. Although this may allow previously scattered opposition to be focused on the most viable alternative candidate, even voters who feel strongly about the current incumbent may find the available options unpalatable. Conservative voters wanting to oppose Michael Martin, for instance, would likely have baulked at the idea of voting for the SNP in 2005.

The lack of main-party challenge may also open the door to political opportunism. For instance, following Martin’s resignation as part of the expenses scandal in 2009, Parmjit Dhanda, the then Labour MP for Gloucester, stood for Speaker in 2009, before losing his seat to the Conservatives a year later. Had his bid been successful, the voters of Gloucester would have been deprived of the opportunity to eject an MP they were intending to replace. Nor is there any guarantee that the MP standing as Speaker in a general election will remain in position. There was an attempt by a small band of Conservative backbenchers to remove Bercow as Speaker due to personal and political differences. If successful, this would have meant not only that the people of Buckingham had been disenfranchised at the election, but that the parliamentary Conservative Party had subsequently declared the justification for limiting their electoral choice to be irrelevant.

All of this is to say that, for the duration of a Speaker’s term in office, normal democracy is effectively suspended in the constituency they represent. This is also the case in Parliament. As a Speaker is unable to display any outward bias, he or she must not advocate or question any policy emanating from the Government. If, for example, the Government was to propose the construction of a new airport in the middle of leafy Buckingham, their Parliamentary representative would be constitutionally unable to raise the issue with the Secretary of State on the floor of the House of Commons, or in a written question. To do so would be a breach of protocol. While the Speaker is able to continue processing casework on behalf of his constituents, he is unable to offer the full range of Parliamentary ‘services’ to his constituents available to any other MP.

We have considered several options for how the UK may address these issues, and ensure the Speaker’s constituents are not excluded from democracy.  A number of broad approaches might be considered, based on the processes for electing the presiding officers in other legislatures, although some would entail more radical change than could probably be countenanced by MPs.

One option may be to transform the office of Speaker, so it is no longer carried out alongside the duties of a regular MP. In this scenario, Speakers would resign their parliamentary seat once selected for the post, but remain in Parliament with a special status. They could perhaps be given a token position such as MP for the Palace of Westminster, if the weight of parliamentary tradition proves too hard to cast off. The constituency would then elect a regular MP to replace the new Speaker. The main potential drawback of this approach would be that the appointment would likely trigger a by-election very soon after a general election – although it is possible this could be delayed, with a new Speaker allowed to continue to represent his/her constituency for a fixed period or until the next general election.

Ireland appears the most similar to the UK in terms of how it elects the Ceann Comhairle, or chairman, of the Irish Parliament’s lower house. Like the Commons Speaker, the Ceann Comhairle observes strict political neutrality in parliament, and the Irish Constitution states that the post-holder is automatically re-elected to his/her constituency at a general election – in the UK, re-election is not automatic but is effectively guaranteed by convention. The key difference is that Irish parliamentary constituencies elect between three and five representatives under the single transferrable vote system: this means that voters in the constituency of the Ceann Comhairle have less choice than other voters, but are not preventing from affecting the result of the election. Of course, full-scale electoral reform is no longer on the UK political agenda following the failure of the Alternative Vote referendum. It is conceivable, however, that a Speaker’s constituency could be transformed into a dual-member constituency for the period he/she is in office, with the main parties each proposing one candidate at a general election.

Other Westminster-style legislatures replicate the impartiality of the presiding officer role we see in the Commons, but without the requirement or expectation that the office-holder will renounce their political party links. The speakers of the lower houses in Canada, Australia and New Zealand stand as candidates for their respective parties at a general election, and are opposed by other parties as in any other constituency. Should the sitting speaker lose his/her seat, legislators simply choose another from their number as a successor.  The United States Congress (not a Westminster-style legislature) goes much further. The Speaker of the US House of Representatives is a partisan role, and its holder is effectively the leader of his or her party – the Speaker and any deputies he or she appoints will often use the powers afforded the post for political gain.

Closer to home,  we can find examples of presiding officers retaining their political party membership.  In the Welsh Assembly the Presiding Officer stands in elections as party members, opposed by other parties: the first office-holder, Dafydd Elis-Thomas, did so in 2003, 2007 and 2011. Experience in the Scottish Parliament has been slightly different: to date each Presiding Officer has voluntarily stood down from their party, and none has so far sought to be re-elected as an independent.

In fact, the House of Commons has three Deputy Speakers that all retain their political allegiances: unlike the Speaker, they are not restricted from local political campaigning, and there is no convention which prevents the three main political parties standing against them. Michael Lord was Deputy Speaker from 1997 to 2010, for instance, but stood as a Conservative in the 2001 and 2005 elections. A quick look at the three current Deputy Speakers’ websites shows they make little attempt to disguise their party identity, despite the retention of studious neutrality while carrying out their parliamentary duties.