My article for Left Foot Forward (22 September 2013), coinciding with the Manchester derby, on the increasing links between English football club owners and repressive regimes in the Gulf. Football fans need to voice their concerns at human rights abuses overseas, I argued.

When Manchester City face Manchester United at the Etihad Stadium on Sunday for the 166th Manchester derby, the game will represent not just an encounter between English football’s leading teams, but also between two contrasting models of football ownership.

Few doubt that United’s owners, the Glazer family, are in it for the money. United made a gross profit of £146 million last year, and much of this was used to pay off the debt the Glazers previously loaded onto the club.

City, meanwhile, are effectively bankrolled by Sheikh Mansour bin Zayed Al Nahyan, who bought the club in 2008. Over 2010-2012 the club lost almost £300 million. But this would barely have made a dent in Mansour’s wealth, and he has continued to spend huge amounts on new players and the club’s stadium complex without any realistic prospect of seeing a return on the investment. 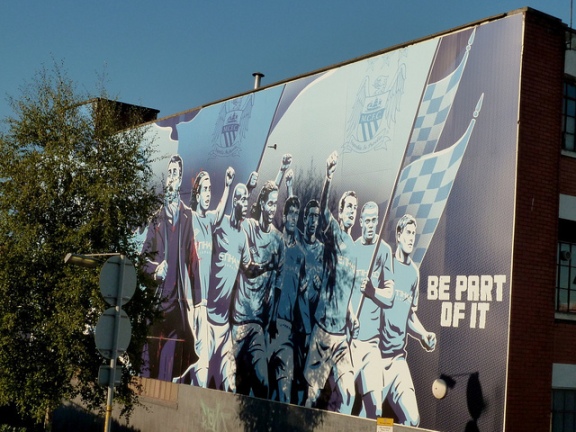 As we might expect, the supporters of the two clubs have very different relationships with their owners. In reaction to the Glazers’ 2005 arrival at United, a group of fans decided to form a breakaway club, FC United of Manchester, while others who stayed pursued a vociferous ‘green and gold’ campaign seeking to drive the owners out.

At City, supporters have welcomed Sheikh Mansour with open arms, with academic Dr Chris Porter noting that his takeover “came to pass without any prominent or concerted objections from City supporters”.

That football fans choose not to protest against an apparently generous owner who has brought success to their club – in 2012 City won their first league championship for 44 years – is perhaps unsurprising. In the wake of the Arab Spring, however, this stance is becoming increasingly untenable.

Mansour is a member of the ruling family of Abu Dhabi, and deputy prime minister of the United Arab Emirates (UAE), a federated state in the Gulf, of which Abu Dhabi is the largest Emirate. While revolutions and civil wars other nations such as Egypt, Libya and Syria have gained global attention since 2011, there have also been protest movements in the UAE and across the Gulf. But precious little progress toward reform has been achieved, and international observers highlight the brutal way the ruling regimes have responded to this pressure.

Recently for Democratic Audit I interviewed Nicholas McGeehan of Human Rights Watch, shortly after reports of the conviction of 69 critics of the UAE government in a mass trial, in which legal assistance was denied to the defendants and there were allegations of torture. We spoke about the contradictions behind the increasing prominence of the UAE regime in the UK’s culture and economy, particularly in football. He told me:

“Football is the working man’s game. People talk about tradition and heritage and where it came from in this country. And yet…the English Premier League Champions [of two years ago] are owned by a government that does not allow trade unions and whose labour system is one of the most repressive in the world.”

The acquisition of Manchester City is just one of a strong of investments in English football. Sheffield United (Saudi Arabia), Leeds United (Dubai and Bahrain) and Nottingham Forest (Kuwait) have Gulf-based owners, while a string of other clubs, including Arsenal, have commercial relationships with Gulf companies.

There is of course, a measure of control over the ownership of football clubs via the ‘fit and proper person’ test used by the FA, Premier League and Football League. McGeehan made clear this is failing to prevent clubs from being used as branding vehicles by human rights abusers:

“[Football clubs] are cultural institutions and they need to be protected from people who would manipulate them and who would harm the club and the game as a whole, which is such a big part of UK culture. No as it stands if you are convicted of financial crimes then you are not allowed to buy a football club… but what it doesn’t address is heads of foreign states who haven’t been prosecuted for crimes because their position enables them to escape any sort of prosecution.”

Arguably, by projecting a positive image of themselves in the UK, repressive regimes in the Gulf are bolstering their efforts to remain in power. Football authorities and ordinary fans need to consider very seriously whether this is something they want to continue to support.

There is a further potential impact of this trend, equally sinister – the downgrading of the UK’s own culture of freedom and human rights.

For instance, this is the week in which Stonewall has launched a campaign to overcome homophobia in English football, encouraging players to wear rainbow-coloured laces. But the weekend’s biggest game will be contested by a club owned by a leading minister of a country where homosexuality is illegal. This is a hypocrisy we must end.