My article for Democratic Audit on the media’s lazy reporting of local election results, as evidenced by the use of the ‘No Overall Control’ description for councils without a majority party. This article was first published in 2014 but remains highly relevant today in the wake of recent elections. For instance, Trafford in Greater Manchester (pictured) switched from a Conservative majority to a hung council, but with Labaour as the largest party. This was not made clear in the use of NOC, meaning the media failed to provide Trafford voters with relevant information about their election.

As the results of the local elections rolled in on Thursday night and Friday, millions of voters across England and Northern Ireland will have been waiting to hear about the outcome in their area. But for a significant minority, the closest they got to an announcement of the result was being told that their council was officially under ‘No Overall Control’ (NOC).

This is how the BBC reported the overall national result, with NOC ‘winning’ the third greatest number of councils after Labour and the Conservatives: 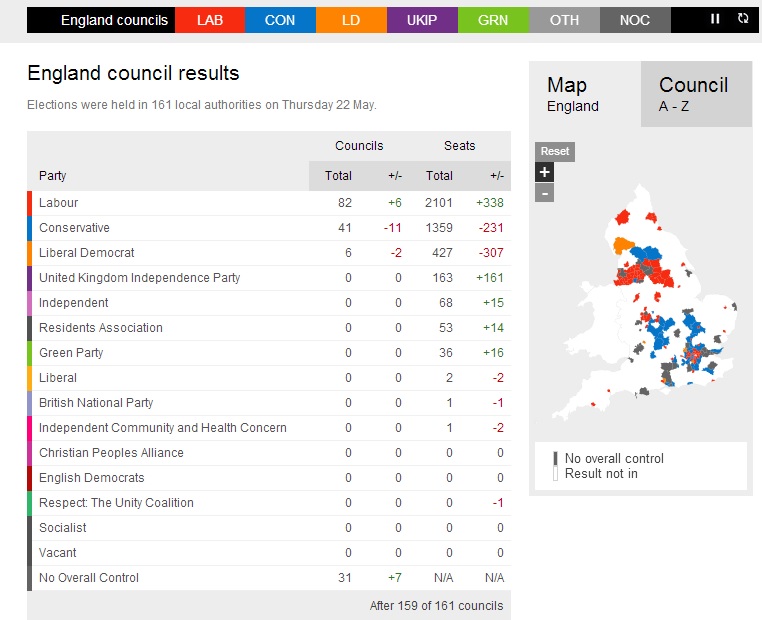 All other national media outlets we checked repeated the same practice, including Sky, The Guardian and The Telegraph. The NOC designation itself is misleading: what is really meant is that no single party has a majority of council seats. This does not mean, of course, that nobody controls the council; a leader and cabinet will still be elected to form the ruling administration, either from the largest party governing alone or in coalition with one or more other parties.

It would be more accurate, therefore, to dispense with the NOC designation. The total number of councils won by each party should include the councils where they are the largest party, even if they do not have a majority. Democratic Audit published a running breakdown of NOC councils as results were being announced last week, noting how many had been ‘won’ by each party. This data gives us a revised national result for England, which looks like this: 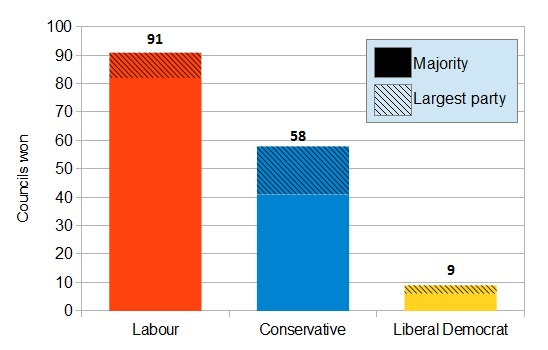 This puts a new perspective on the overall national result. While Labour won twice as many councils outright as the Conservatives last week, when we include the NOCs we see that, in reality, they won just over a third more councils. Meanwhile, the performance of the Liberal Democrats is improved by 50% when we include the NOCs.

Of course, voters looking for their own council can find a more detailed summary, which shows them how many seats each party has locally. However, these summaries often fail to provide any more clarity about who has won the election. If there is a single party with significantly more seats than all others, it may be relatively clear that party will go on to lead the administration. But where parties are more evenly matched, voters are left with no clue about who is in power.

For instance, look at the BBC summary of the election for Great Yarmouth Borough Council, one of those where UKIP performed particularly well: 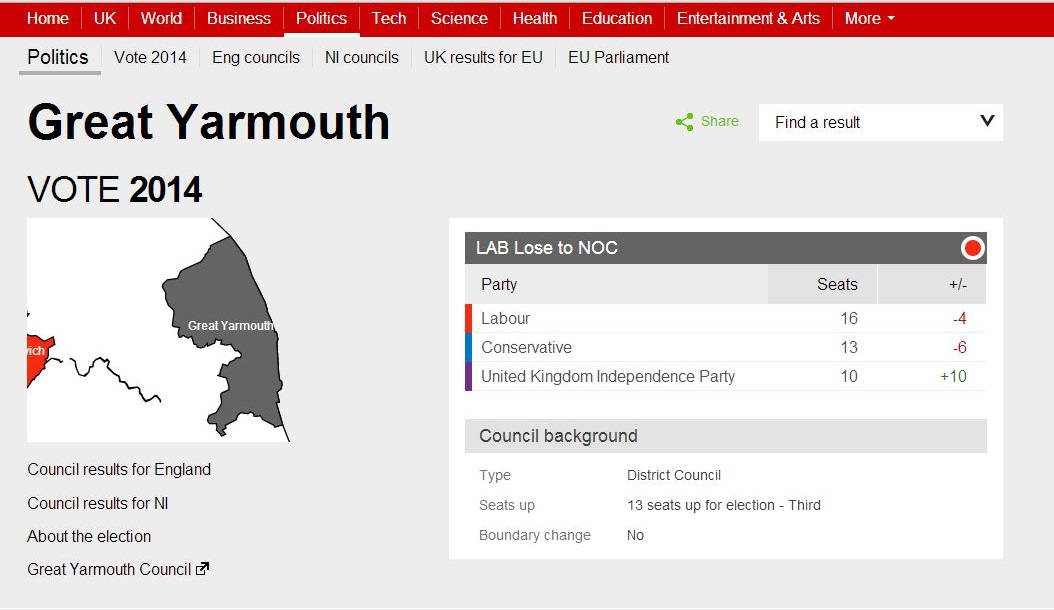 With this new composition, there are three viable coalitions, plus the possibility Labour may run a minority administration. This summary does not reveal what the final outcome is. Although it might be pointed out, rightly, that Great Yarmouth councillors have not yet reached any agreements on who will rule, it is also the case that the BBC will not return to update this summary once they have.

It is worth remembering that the House of Commons itself is NOC, according to the media’s definition. Strangely, we never use that term for Westminster elections, preferring the similarly vague ‘hung parliament’. Imagine if the BBC had failed to report after the 2010 election that the Conservatives and Liberal Democrats had formed a coalition government? It’s inconceivable, but that is effectively what they and all national media outlets do after local elections for NOC councils.

Councils themselves can and should take steps to rectify this deficit of information. Disappointingly, many do not. Staying with Great Yarmouth, we checked how the results had been reported on the council website. There is no item about the election results on the council homepage, and no press release has been issued. Clicking through to the ‘Elections’ page on the website, visitors will eventually be presented with the following summary result:

This summary only tells voters about the results of the seats that have just been elected, and does not show the new composition of the council. Voters would be forgiven, therefore, for thinking UKIP won the election. In a narrow sense this might be true, but the bigger picture is that UKIP is in fact the smallest party on the council. The outcome that matters most – knowing which party will provide the Leader of the Council – would be even murkier for voters after checking this summary.

Both the media and councils need to consider changing the way they inform voters about local elections results: